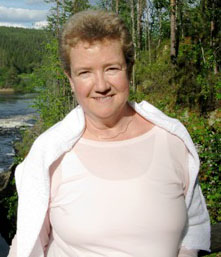 Martha Nell Smith is Distinguished Scholar-Teacher, Professor of English, and Founding Director of the Maryland Institute for Technology in the Humanities (MITH http://www.mith.umd.edu) at the University of Maryland.

Smith is also Coordinator and Executive Editor of the Dickinson Electronic Archives projects at the Institute for Advanced Technology in the Humanities (IATH) at the University of Virginia (http://emilydickinson.org). Smith co-edited Emily Dickinson’s Correspondence: A Born-Digital Textual Inquiry (2008; http://rotunda.upress.virginia.edu/edc) published by Rotunda New Digital Scholarship, University of Virginia Press, and worked in the early stages on the Mellon-sponsored data mining and visualization initiative, NORA (2003-2007), which grew into MONK (Metadata Offer New Knowledge; http://www.monkproject.org/). Smith also serves on the Advisory Board of Harvard University Press’s Emily Dickinson Archive (http://edickinson.org). The recipient of numerous awards from the National Endowment for the Humanities (NEH), the American Council of Learned Societies (ACLS), the Mellon Foundation, and the Fund for the Improvement of Postsecondary Education (FIPSE) for her work on Dickinson, American literary history, and in new media, Smith is a founding board member of the Emily Dickinson International Society (EDIS), for which she has served as President since August 2013. On the editorial board and steering committee of NINES (Networked Interface for Nineteenth-Century Electronic Scholarship; http://www.nines.org), she serves in an advisory capacity for C19: The Society of Nineteenth-Century Americanists, and is on numerous advisory boards of digital literary projects such as The Poetess Archive and the Melville Electronic Library (MEL).  A leader in innovations in academic publishing, Smith served on the Executive Council of the Association for Computers in the Humanities (2001-2004), co-chaired the Modern Language Association (MLA)’s Committee on Scholarly Editions (CSE, 2004-2008), and chaired the University of Maryland’s Library Council (2008-2011). Through January 2018, Smith served upon and then chaired the MLA Forum Executive Committee on Sexuality Studies (formerly Gay Studies in Language and Literature).

For outstanding scholarly achievement and innovative leadership in which diversity inheres in any definition of excellence, Livingston College at Rutgers University awarded Smith its Distinguished Alumni Award in 2009, the highest honor that the college bestows upon its former students.  In 2010, Smith was named a Distinguished Scholar-Teacher at the University of Maryland, and in 2011 she was appointed ADVANCE Professor in the College of Arts and Humanities as part of a NSF-funded project to cultivate inclusive excellence, and in 2012 was appointed an ADVANCE Fellow.  In May 2011, Smith was voted Chair-Elect of the University of Maryland Senate, and became Chair for the 2012-2013 term.

Everywoman Her Own Theology: On the Poetry of Alicia Suskin Ostriker

Alicia Ostriker’s artistic and intellectual productions as a poet, critic, and essayist over the past 50 years are protean and have been profoundly influential to generations of readers, writers, and critics.

In all her writings, both the feminist and the human engage fiercely with the material and metaphysical world. Ostriker is a poet concerned with questions of social justice, equality, religion, and how to live in a world marked by both beauty and tragedy.

"I Dwell in Possibility” — an annotated compendium of 104 new Chinese translations of Dickinson’s poems.

“Unable and Unwilling: the Other Woman’s Love Poem for the Wife”

Golden Handcuffs is among the handful of truly important contemporary literary magazines.

"Frozen Social Relations and Time for a Thaw: Visibility, Exclusions, and Considerations for Postcolonial Digital Archives"

"Frozen Social Relations and Time for a Thaw: Visibility, Exclusions, and Considerations for Postcolonial Digital Archives," Journal of Victorian Culture 19.3 (2014): 403-410.

"Civil War(s) and Dickinson’s Manuscript Book Reconstructions, Deconstructed: the Archives of our Attentions”

Dickinson’s Fascicles: A Spectrum of Possibilities is the first collection of essays dedicated exclusively to re-examining Emily Dickinson’s fascicles.

Emily Dickinson, A User's Guide presents a comprehensive introduction to the life and works of Emily Dickinson, Offers a richly appreciative biographical and critical introduction to America's most widely admired woman poet Written by a world-renowned Emily Dickinson scholar and American literary critic Represents the only book that reads Dickinson through her manuscripts, the print editions of her work, and the major digital Dickinson editions published since 1994 The User's Guide is a new kind of book for a new era of reading Is the only book that is an introduction to the poet, her work, and her receptions among readers Is the only book that presents new biography and textual discoveries that have just come to light in 2011 Interprets Dickinson through the dynamic interchange between the reader's sense of her life and her work Draws on prominent critical views from the past century, including sentimental, modernist, new critical, psychological, feminist, queer, and postmodernist readings.

Unpublished in book form during her lifetime, the poems of Emily Dickinson were nonetheless shared with those she trusted most -- through her letters.

Unpublished in book form during her lifetime, the poems of Emily Dickinson were nonetheless shared with those she trusted most -- through her letters. Smith and Vetter's new XML-based digital archive, available for purchase from University of Virginia Press, brings together seventy-four poems and letters from Emily's correspondence with her sister-in-law Susan Dickinson. Each text is presented with a digitized scan of the holograph manuscript. Users may search by date, genre, manuscript features, and full text. Dating from the 1850s to the end of Dickinson's life, the work collected here shows all the characteristic's of the poet's mature art.

A Companion to Emily Dickinson

This Companion to America's greatest woman poet showcases the diversity and excellence that characterize the thriving field of Dickinson studies.

This Companion to America's greatest woman poet showcases the diversity and excellence that characterize the thriving field of Dickinson studies. This landmark volume features new work being done in the critique of nineteenth-century American poetry generally, as well as new work being done. The Companion is designed to be used alongside the Dickinson Electronic Archives (of which Smith is Executive Editor and Coordinator), an online resource developed over the past ten years.

For the first time, letters from Emily Dickinson's 36-year correspondence to her neighbor and sister-in-law, Susan Huntington Dickinson, are compiled in a single volume.

For the first time, letters from Emily Dickinson's 36-year correspondence to her neighbor and sister-in-law, Susan Huntington Dickinson, are compiled in a single volume. Open Me Carefully overcomes a century of censorship and misinterpretation, allowing readers to understand Dickinson's poems in the context of her daily life and bringing to light Susan Huntington Dickinson as teh central source of the poet's passion and inspiration, and Emily's primary reader and poetic collaborator. The letters literally unfold Dickinson's life and art through expressions of longing and desire interspersed with discussions of literature, politics, and family concerns.