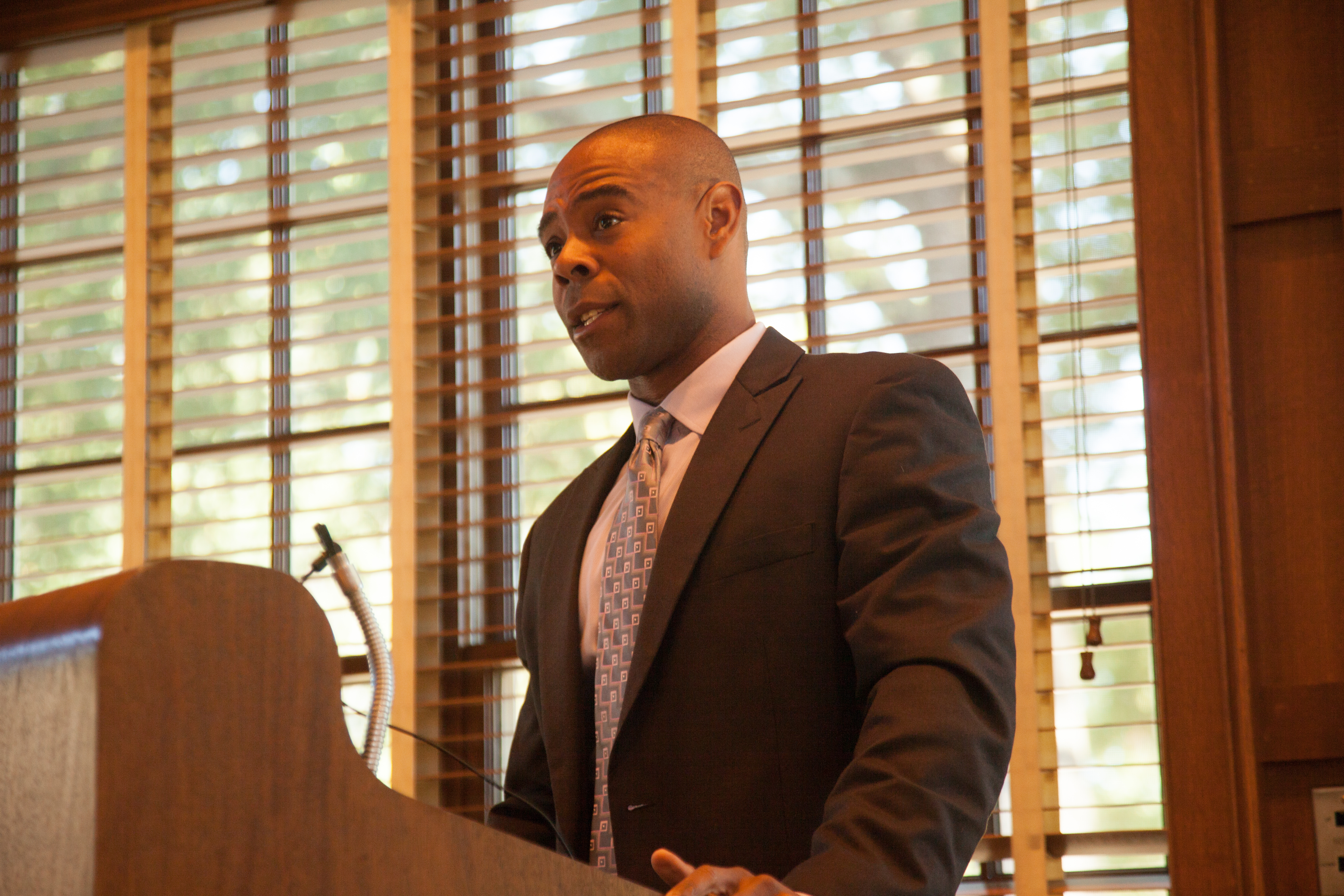 Tawes Hall 2116b
Get Directions

GerShun Avilez is a cultural studies scholar who specializes in contemporary African American and Black Diasporic literatures and visual cultures. His teaching also covers 20th century US literature. Much of his scholarship explores how questions of gender and sexuality inform artistic production. In addition, he works in the fields of political radicalism, spatial theory, and gender studies.

His first book, Radical Aesthetics & Modern Black Nationalism (Illinois), appeared in 2016 as a part of “The New Black Studies” Series.  The book investigates how Black nationalist rhetoric impacted African American artistic experimentation in the 20th and 21st centuries through an examination of drama, novels, poetry, film, and visual art.  Radical Aesthetics won the 2017 William Sanders Scarborough Prize from the Modern Language Association (MLA).  The prize is given to an outstanding scholarly study of African American literature or culture.

His second book, Black Queer Freedom (Illinois), explores Black Diasporic queer artists and questions of social space. It was published in 2020 and is also a volume in “The New Black Studies” Series. He is currently working on a third book project, which focuses on documenting queer history. He also recently edited a special issue of the journal Women's Studies. He has written essays on a range of historical and cultural subjects, including the Cold War, segregation narratives, early African American writing, race & terror, social death, queer life, experimental poetry, Black women’s writing, the Harlem Renaissance, Black Power Politics, and, of course, the Black Arts Movement.

Throughout his work and teaching, he is committed to studying a wide variety of art forms, including, drama, fiction, non-fiction, film, poetry, visual and performance art, ethnography, and comic books. He was the recipient of the Poorvu Award for Excellence in Interdisciplinary Teaching in 2011 (Yale University).
He created and coordinates the departmental Africana/Black Studies Colloquium, which hosts a number of events (lectures, roundtables, book launches, discussion groups, etc.) each year centered around African American and Black Diasporic research. He is an elected member of the MLA Delegate Assembly, and he serves on the Committee for Gender and Sexuality Studies for the Association of American Studies (ASA).

For an outstanding scholarly study of black American literature or culture.

Laws are passed in a crisis mood after a Birmingham or Selma, but no substantial fervor survives the formal signing of legislation.

Martin Luther King Jr.’s assessment of the incomplete nature of civil rights, even in the midst of historic legislative change, resonates with experiments in African American literary and performance culture of the 1960s.

Newton s statement made one year after Stonewall and the same month Newton was released from prison takes the unorthodox step of suggesting the importance of black radical organizations and collectives.

After the assassination of Malcolm X in 1965, he left Greenwich Village and moved to Harlem to take up the work Malcolm had begun. Rejecting his bohemian past, he committed himself to black nationalism and founded the Black Arts Repertory Theatre­School to radicalize the poor through art.

GerShun Avilez charts a new genealogy of contemporary African American artistic production that illuminates how questions of gender and sexuality guided artistic experimentation in the Black Arts Movement from the mid-1960s to the mid-1970s. As Avilez shows, the artistic production of the Black Arts era provides a set of critical methodologies and paradigms rooted in the disidentification with black nationalist discourses. Avilez's close readings study how this emerging subjectivity, termed aesthetic radicalism, critiqued nationalist rhetoric in the past. It also continues to offer novel means for expressing black intimacy and embodiment via experimental works of art and innovative artistic methods.

Featured in The Psychic Hold of Slavery: Legacies in American Culture.

What would it mean to “get over slavery”? Is such a thing possible? Is it even desirable? Should we perceive the psychic hold of slavery as a set of mental manacles that hold us back from imagining a postracist America?

Featured in The Cambridge Companion to Literature of American Civil Rights.

The Cambridge Companion to American Civil Rights Literature brings together leading scholars to examine the significant traditions, genres, and themes of civil rights literature. While civil rights scholarship has typically focused on documentary rather than creative writing, and political rather than cultural history, this Companion addresses the gap and provides university students with a vast introduction to an impressive range of authors.

Featured in The Cambridge History of Gay and Lesbian Literature.

"The Aesthetics of Terror: Constructing 'Felt Threat in Those Bones Are Not My Child and Leaving Atlanta."

Avilez analyzes the suspenseful novel portraying a community–and a family–under siege, during the shocking string of murders of black children in Atlanta in the early 1980s.

The book, an anthology of critical essays, poetry, personal narratives, interviews, and other writings, provides a vivid synopsis of writer and activist Joseph Beam (1954-1988) as well as other figures of the 1980s Black gay arts movement.

Black Gay Genius looks back at the 1980s, but also looks forward, seeking to build upon the artistic and political legacy of black gay men’s from the 1980s.

"Cartographies of Desire: Mapping Queer Space in the Fiction of Samuel Delany and Darieck Scott"

Applying his knowledge of urban planning to the field of cultural theory, Haitian-American architect-artist Jean-Ulrick Désert invokes the concept of "queer space" in order to describe the complicated (yet valuable) nature of actual gay and lesbian commun

Locations, he contends, simultaneously engage and transgress the social, architectural, and juridical meanings attributed to the areas that they occupy by means of the subversive bodies that collectively inhabit and pass through them. He goes on to characterize this concept in these terms: "queer space is in large part the function of wishful thinking or desires that become solidified: a seduction of the reading space where queerness, at a few brief points and for some fleeting moments, dominates the (heterocentric) norm, the dominant social narrative of the landscape" (21, emphasis added).1 The term "queer space" is most often employed as a way to discuss and analyze the precarious positioning of gay, lesbian, and transgender social spaces and the politics of gentrification in regard to these locations.2 However, I believe that Désert's formulation reveals the potential of the lens of "queer space" to exceed its strictly geographical or architectural valence and provide a framework for theoretical and formal analysis within literary studies.

Linking mobility and housing, the article connects two issues to the rights and privileges of citizenship in a democracy.

Hansberry takes on residential segregation by confronting that practice not merely as a restriction on domestic space but mainly as a constriction of civic identity. The case intimates that, given the centrality of segregation to restrictive practices affecting citizenship, the relationship of African Americans to places of residence and to domestic space in general is indicative of their relationship to legal structures. The social and legal developments that directly and indirectly encouraged segregated housing during the mid-twentieth century created the conditions for African Americans to feel estranged from their domestic spaces. (1) The feelings of frustration and dissatisfaction with the "kitchenette" expressed in Gwendolyn Brooks's poem define the housing problems to come for many African American communities, and such sentiments factor into representations of domestic space in mid-20th-century African American narratives.

Director, Graduate Studies at the University of Maryland English Department