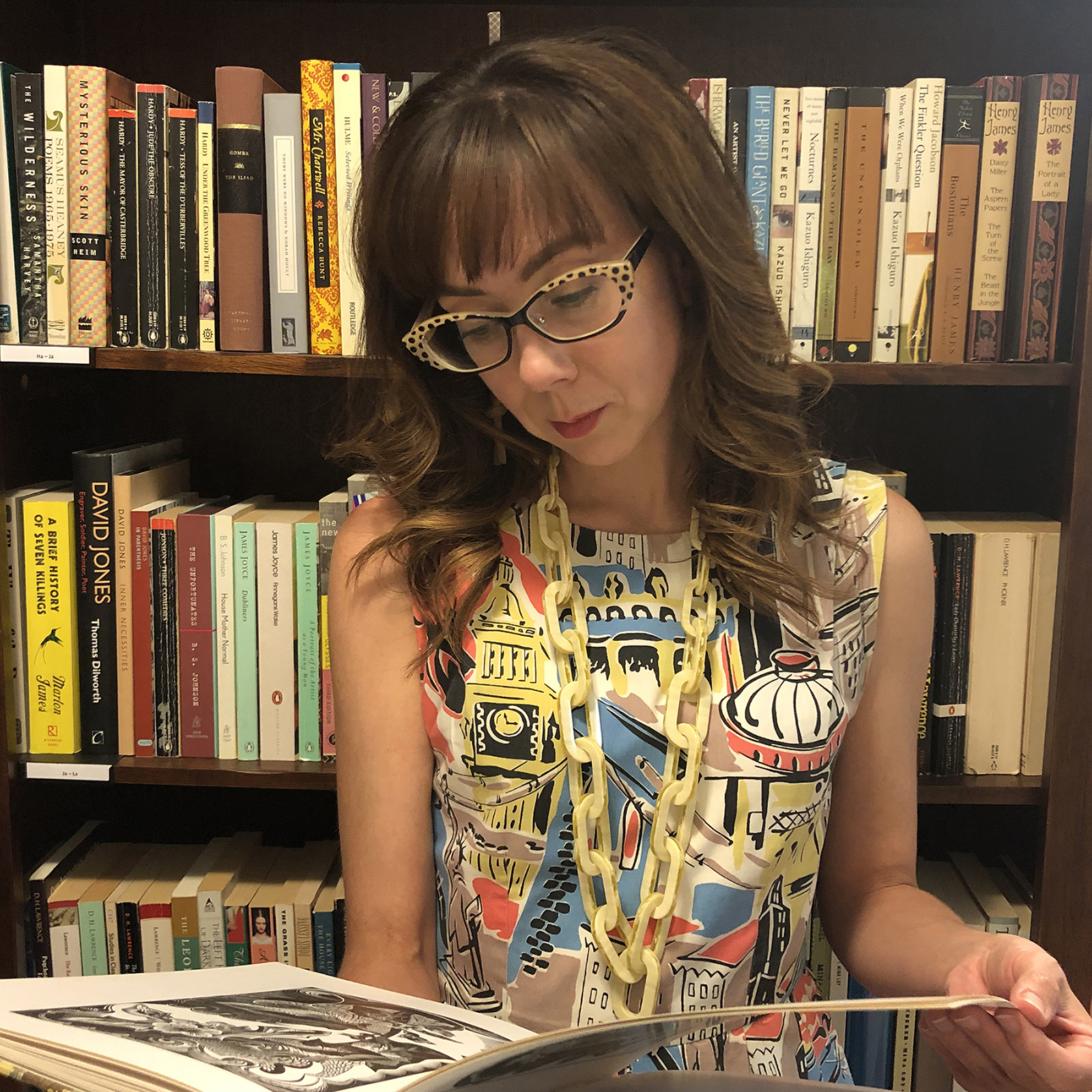 I specialize in modern and contemporary British and global anglophone literature and visual culture; in the intersections of science, technology, and aesthetics; and in gender and critical race studies.

My book Optical Impersonality: Science, Images, and Literary Modernism (Johns Hopkins 2014) remaps one of the most dominant modernist aesthetics, that of “impersonality.” It uncovers how stylists of impersonality--from Mina Loy to T. S. Eliot to Eve Kosofsky Sedgwick--adapted ideas and experiments from the contemporary science and philosophy of human vision, participating in a popular rethinking of the psychology and physiology of sight and also rewriting a long-standing artistic conversation about what images are and do. Their goal was to situate human subjecthood firmly within the body and to use that subjectivity to call for political changes in the ways we live and relate to each other.

I am currently working on a monograph entitled "Modernism from the Gut: Aesthetics, Ontology, and the Science of the Second Brain." The gut has received a major promotion in contemporary discourses of the body. No longer just the energy factory that fuels the more interesting parts of our existence, it has taken on an outsized ontological aura equivalent to that of “the mind”—with some going so far as to label the gut “the second brain.” While digestive and nutritional sciences are widely cited to justify this promotion, we don’t yet have a history of how these sciences were turned into an ontological story that’s also an object of popular fascination. “Modernism from the Gut” unearths some of the early and most intriguing chapters in this story, returning to the moment when the sciences of the gut became specialized in the early twentieth century and exploring their interchange with a modernist culture that avidly took them up. It explores as well the legacy of these stories in contemporary popular science and media accounts of the gut microbiome and even GUT theory.

I’m also working on a short monograph entitled “Lee Miller’s Food Modernism,” which investigates the lived art of the renowned photographer and journalist Lee Miller from the 1950s through 70s. Miller put down her camera after WWII and is typically understood to have retired into domestic life. Making extensive use of unpublished archival materials, though, I trace how Miller, far from retiring, instead turned to a lived modernism organized around surrealist food production, display and consumption—from cooking contests and magazine essays to farming experiments and curated house parties. In other words, Miller was engaged with modernist art long after her own public youth and the youth of modernism itself.

Western accounts of human vision before the nineteenth century tended to separate the bodily eye from the rational mind.

This model gave way in the mid–nineteenth century to one in which the thinking subject, perceiving body, perceptual object, and material world could not be so easily separated. Christina Walter explores how this new physiology of vision provoked writers to reconceive the relations among image, text, sight, and subjectivity. Walter focuses in particular on the ways in which modernist writers such as H.D., Mina Loy, D. H. Lawrence, and T. S. Eliot adapted modern optics and visual culture to develop an alternative to the self or person as a model of the human subject. Critics have long seen modernists as being concerned with an "impersonal" form of writing that rejects the earlier Romantic notion that literature was a direct expression of its author’s personality. Walter argues that scholars have misunderstood aesthetic impersonality as an evacuation of the person when it is instead an interrogation of what exactly goes into a personality. She shows that modernist impersonality embraced the embodied and incoherent notion of the human subject that resulted from contemporary physiological science and traces the legacy of that impersonality in current affect theory.

Christina Walter explores how a new physiology of vision provoked writers to reconceive the relations among image, text, sight, and subjectivity.

Western accounts of human vision before the nineteenth century tended to separate the bodily eye from the rational mind. This model gave way in the mid–nineteenth century to one in which the thinking subject, perceiving body, perceptual object, and material world could not be so easily separated. Christina Walter explores how this new physiology of vision provoked writers to reconceive the relations among image, text, sight, and subjectivity. Read more at JHUP.

In 1917, a New York Evening Sun reporter interviewed English writer and painter Mina Loy for a piece on the "modern woman."

The resulting article characterizes Loy as a representative specimen of this type whose career it is to "express her personality." Loy accomplishes such an expression, the reporter contends, by wearing clothes from the smartest shops and by crystallizing into symbols "the images that fly through her brain" ("Do You Strive"). A few years later, Harriet Monroe reported in Poetry magazine of her 1923 meeting with Loy, "I may never have fallen very hard for this lady's poetry, but her personality is irresistible. . . . Yes, poetry is in this lady whether she writes it or not" (96). Even friend Natalie Barney followed this lead. When introducing Loy's poetry reading at a meeting of her Académie des Femmes in May 1927, she focused at length on Loy's singular "personality" (158), which she analogized to that of a somnambulist who has "gazed upon the Gorgon," and so gained "some perception of the fourth dimension" (160).

“Cinema and the Classics” is a series of three essays written by H.D. and published in the first English-language film journal Close Up in 1927.

The journal was created and edited by POOL Productions, an experimental film company of which H.D. was a part and which used the journal as a forum for explaining the theoretical ideas behind its films. Together, H.D.’s three essays—“Beauty,” “Restraint,” and “The Mask and the Movietone”—characterize the ills of the modern human condition and suggest that cinema can help correct that condition in the spectator. In its characterization of film and the film experience, “Cinema and the Classics” reflects H.D.’s own formulation of the modernist aesthetic of impersonality and shows that that aesthetic is centered on a modern understanding of vision.

“Feminist Manifesto” is a polemic against women’s subordinate position in modern Western culture, penned in 1914 by Anglo-American writer and painter Mina Loy.

This polemic, unpublished in Loy’s lifetime, is one of her earliest prose works and offers a rather violent program for securing women’s individuality and thereby transforming their social and artistic status. Auto-Facial-Construction is an advertising pamphlet that Loy produced in 1919 to capitalize on her exercises for (supposedly) achieving the ideal mimetic relation between one’s face and one’s personality. By this time separated from her first husband, English photographer Stephen Haweis, Loy pursued many such schemes and inventions to support herself financially. Auto-Facial-Construction and “Feminist Manifesto” together—in their ruminations on individuality and personality—reflect Loy’s early ambivalence toward a modernist aesthetic of impersonality, as well as her gradual and increasing investment in the notion of human subjectivity and embodiment that it proposed.

“From Image to Screen: H.D. and the Visual Origins of Modernist Impersonality”

This essay traces the visual origins of modernism's impersonal aesthetic through the example of two critical-theoretical works by H.D.

Notes on Thought and Vision (1919) and 'Cinema and the Classics' (1927). It argues that the embodied observer proposed in fin-de-siecle optical science crucially influenced the form and goals of modernist impersonality, and charts two distinct phases in the development ofH.D.'s particular version of that aesthetic. In the first phase,H.D. looked to visual art and, inthe second, tofilmandpsychoanalysis, as modern visual discourses through which to explore the embodied and fundamentally impersonal nature of subjectivity. Through her visual languages, or 'imagetexts', she considered ultimately the implications of such a subjectivity for embodied identities like gender, sexuality, and race.

“Booksellers and Bestsellers: British Book Sales as Documented by The Bookman, 1891 – 1906”

Research on book sales, as Wallace Kirsop has pointed out in this journal, has only recently gained the prominence the subject deserves.

Though Simon Eliot’s monograph Some Patterns and Trends in British Publishing, 1800–1919 (1994) illustrates the value of compiling statistics and analyzing book production, little has been done to compile and analyze statistics on book sales in Britain. Richard Altick’s appendix to The English Common Reader (1957) and its later supplements2 remain the only attempts to compile sales statistics, and these efforts, in Altick’s own words, “run the whole gamut of authenticity, from the reasonably accurate . . . to the extravagant,” because the figures are drawn from a number of different sources, such as publishers’ histories, letters, and trade journals.3 In the United States this is not the case: scholars have Alice Payne Hackett’s compilation 80 Years of Bestsellers, 1895–1975 (1977), which offers bestseller lists for each inclusive year, though with only minimal analysis.

In fall 2015, The Phillips Collection and the University of Maryland launched a bold partnership with a shared vision to dramatically transform scholarship and innovation in the arts.

Layered with rich opportunities to collaborate, the agreement is ambitious, entrepreneurial, and risksupportive—essential qualities in today’s competitive arts and academic environments. Together, The Phillips Collection will expand its education programs, reach new and diverse audiences, and pursue key initiatives that align with the museum’s strategic mission as an “experiment station” and institution for learning. At the same time, UMD will grow its established scholarship and academic programs within the arts, provide unparalleled research and education opportunities for UMD faculty and students, and expand its footprint in the nation’s capital.