The one-day symposium serves as the scholarly centerpiece of the University of Maryland’s FrankenTerps celebration of the 200th anniversary of Mary Shelley’s Frankenstein.

Learn more about the University of Maryland’s FrankenTerps celebration of the 200th anniversary of Mary Shelley’s Frankenstein. 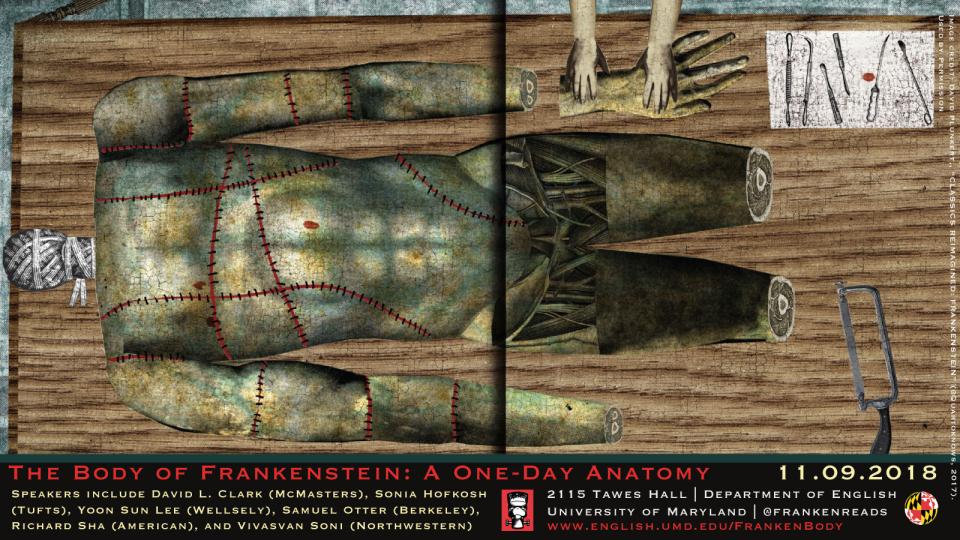 Registration is free but required.

Vivasvan Soni (Northwestern University), “The Utopias of Frankenstein”
Frankenstein makes a surprising argument, namely that it is necessary for utopian thought to accompany political action even in the face of the text’s own failed utopias. But to rest the case for the novel’s advocacy of utopian imaginings on the creature’s enthusiastic reading of Plutarch is hardly sufficient, though the evidence is by no means trivial. In order to probe more fully how the novel bolsters its case that utopian thought is essential for successful action, we must shift our perspective and consider what serves as an impetus for (political) action in each of the three narratives that comprise the novel (Walton, Victor, the creature). What we will discover is that Frankenstein offers a taxonomy of modalities of action in which the utopian imagination is pointedly absent or dysfunctional, leaving only the Genevan utopia as a model exercise in utopian writing. By showing systematically the failure of modes of political or revolutionary action not grounded in what we might call “utopian realism,” and offering the Genevan utopia as a viable alternative, the novel urges us to ground political action not in the merely destructive negativity of critique, the untethered flight of the imagination, the reactive cyclicity of vengeance, the obsessive pursuit of a single narrow purpose, or the freedom of new beginnings without ends (Arendt), but rather in a concrete and holistic vision of a different form of life actualized in tangible practices and described in rich psychological and political detail.

Samuel Otter (U.C. Berkeley), “The Very Creature He Creates': Frankenstein in the Making of Moby-Dick"

For Herman Melville, while writing Moby-Dick, Mary Shelley’s Frankenstein was not peripheral but crucial. Over the past decades, various critics have mentioned a connection between Moby-Dick and Frankenstein. Yet rarely is Shelley’s novel discussed as a significant intellectual or aesthetic influence on Moby-Dick. I will analyze the ways in which Melville was influenced by Frankenstein, verbally and visually, in terms of scene, image, character, and issues of psychology, materiality, heroism, egotism, obsession, creativity, and form. I will focus on a scene at the end of the chapter "The Chart." In a famously difficult passage, Melville depicts and analyzes Ahab's divided self. Melville drew on Shelley's scene in which Frankenstein flees from his creation and also on Shelley's introduction to the third edition of Frankenstein (Melville acquired a copy in 1849) and on this edition's frontispiece illustration of that scene by the engraver William Chevalier, based on a rendering by the artist Theodor von Holst. In terms that resonate with the symposium's title, I will be attending to the bodies of Frankenstein, the Creature, and Ahab (and maybe even the Whale).

Yoon Sun Lee (Wellesley College), “Putting the Pieces Together: Plot, Action, and Causation in Frankenstein”
Aristotle describes a well-crafted plot or mythos as an action that is "serious, complete, and of a certain magnitude." These parameters also provide the measures by which Victor Frankenstein's creation (as an act, and as the thing produced) both succeeds and notably fails-- paradoxically, by falling short and exceeding. The monster is too big. The action can never be complete. This paper will try to find ways to talk about the plot of Shelley's Frankenstein. Plot or mythos in the sense of what Eric Downing calls "a self-sufficient and self-enclosed causal chain" seems to be set up more as a horizon than an actuality in the novel; as a result, causality and consequence become matters of disputation, obsessive claims, stories that have to be told. Why? My touchstones will be Aristotle's Poetics and Physics and Lukács's understanding of reification and praxis, as well as the latter's strongly Aristotelian poetics of realism. The conundrum I want to examine is the way that Shelley's novel wants both to release, as it were, the objective consequences of action, to let them unfold freely in the fictional world, and at the same time to draw or furl them tightly within the very conception of action itself, represented purely diegetically.

Why does embodiment mean so much for consciousness and the humanities, but offer so little help to the sciences?  I’ll begin with a scathing article on embodied cognition that dismisses any contribution from embodiment, and then consider Katherine Hayles on how embodiment insists upon contingency, and thus serves as an important riposte to information theory.  Then what does Mary Shelley think about and value in embodiment, especially the nervous body of sensibility?

David L. Clark (McMaster University), “Insult to Injury: Frankenstein and a Theory of the Corpse”

Frankenstein concludes with two corpses:  the burned-out corpse of Victor Frankenstein, which the creature immediately imagines—“in some mode unknown to me”--living on past death; and the about to be burned-up creature, constructed out of the corpses of others yet living on past its creator’s demise. But what is a corpse? And what does it mean to for a corpse to be desecrated, i.e., injured, debased, and otherwise not left in peace? My paper falls into two sections. In the first, I turn rather closely to the question of the reanimated corpse in the last pages of Frankenstein, in which, I argue, abused dead bodies make lots of trouble for the text. I then pan out to develop what I call “a theory of the corpse.” Romantic wartime makes the question of the violently rendered dead a pressing concern for Mary Shelley. Like other thinkers and artists responding to horror and loss of the Napoleonic Wars, including Francisco Goya and Felicia Hemans, Mary Shelley tries to do justice to the disturbing spectacle of the derelict corpse rather than know what it is. In the disheveled remains of others, these Romantic figures suggest, we glimpse something cadaverous about ourselves.

Sonia Hofkosh (Tufts University), “When Jane Met Mary: Frankenstein’s Romantic Comedy”
This paper will read Frankenstein; or The Modern Prometheus in the context of questions about genre, form, and style prompted by the coincidence of Mary Shelley’s first novel appearing in print at the same time that Jane Austen’s last ones are posthumously published at the beginning of 1818.  In our own time of mashups such as the recent Frankenstein Darcy (2016) and Pride and Prometheus (2018), I am interested in what considering Austen and Shelley in simultaneous circulation might reveal or bring out about each writer—the horror lurking at the edges (or even at the constitutive ground) of Austen’s normative realism or the investment in conventional structures of the marriage plot embedded in Shelley’s speculative fiction.  I will focus on how Shelley deploys some of the strategies or produces some of the effects of Austen’s distinctive brand of romantic comedy, including her use of a shifting narrative voice, metaleptic crossings of unstable narrative boundaries, and irony.  Exploring the apparently disjunctive pairing of Austen and Shelley allows us to see the tendency in Shelley’s writing towards a mode of romantic comedy upon which adaptations of Frankenstein from her day to our own have repeatedly drawn.

Find information on parking, lodging and transportation to the University of Maryland.