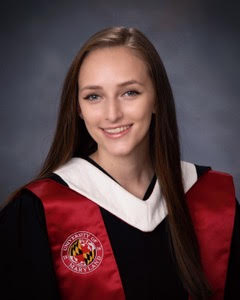 English senior Lauren McNerney is a member of the Mighty Sound of Maryland marching band with a strong interest in equal protection and civil rights law. Lauren will pursue a J.D. at the University of Virginia School of Law next fall.

Why did you become an English major?

I enrolled at UMD as a Government and Politics major, but decided to double major in English during the spring of my freshman year after taking ENGL140: "American Fictions: Cross-Examining U.S. Literature, History, and Politics” with Dr. Peter Mallios. Dr. Mallios and the course’s graduate TA at that time, Andy Yeh, transformed my understanding of the intersecting themes of law, race, gender, and history in several literary works. Because of their exceptional teaching and encouragement, I became committed to studying literature and to acquiring the critical analysis skills that the UMD English Department instills in its students.

What clubs, groups, and internships have you been involved with?

Outside of class, I am a member of the Mighty Sound of Maryland, which is UMD’s marching band. I have been a member of MSOM’s alto saxophone section for all four years of college. I was also a squad leader for the alto saxophone section in my fourth and final year. In my junior year, I became a member of the Honor Council in the University Student Judiciary. Additionally, I interned for Senator Antonio Hayes as part of the English Department’s year-long Maryland General Assembly Internship Program with Dr. Thomas Lowderbaugh. I went on to become an undergraduate TA for that program, an experience which prepared me for my current teaching assistantship in UMD’s Government and Politics Department.

What is something you read during class that impacted your worldview?

Zora Neale Hurston’s Their Eyes Were Watching God is one text I read during class that transformed my worldview. As I read the novel, I was awed by Hurston’s masterful writing and the ways in which the text explores themes of power, oppression, love, and selfhood. Their Eyes Were Watching God fundamentally changed the way I evaluate relationships and power dynamics, as well as how I understand my selfhood and agency in relation to individuals, communities, and institutions. Of course, this is one of many texts that had a profound impact on me during my time studying English at UMD.

What skills do you think you’ve gotten from the major?

As an English major, I’ve primarily gained and strengthened critical analysis, writing, reading, and researching skills. I’m particularly grateful for the improvement I’ve seen in both my academic and professional writing over the last four years. Every class I took in the English major facilitated the development of these skills, but two experiences in particular had a large impact on my growth as a writer. The Maryland General Assembly Internship Program really honed my professional writing skills through a combination of classroom practice and real-life application at our state’s legislature. My participation in the English Honors Program, which involved the completion and defense of an undergraduate thesis, strengthened my academic and persuasive writing and speaking skills in ways that completely exceeded my expectations. Moreover, the English Honors Program provided me with exceptional faculty mentors, such as Dr. Tita Chico, Dr. Jason Rudy, and Dr. Edlie Wong, each of whom spent time facilitating the improvement of my writing and critical thinking skills.

What is your dream job or career?

My dream job is to become a lawyer working in the sector of public interest/service, where I would provide direct legal services to those in need of them and potentially work on progressive impact litigation. I also dream of becoming a teacher in some capacity later in my career. My current interests lie in equal protection and civil rights law, but I imagine that those interests will evolve and/or narrow in the future. Choosing to double major in English has strengthened and focused my career goals in the legal field. Moreover, the skills, knowledge, and mentorship I have gained and had access to in the English major played a significant role in my acceptance to law schools this year. Next fall, I will pursue a J.D. at the University of Virginia School of Law.