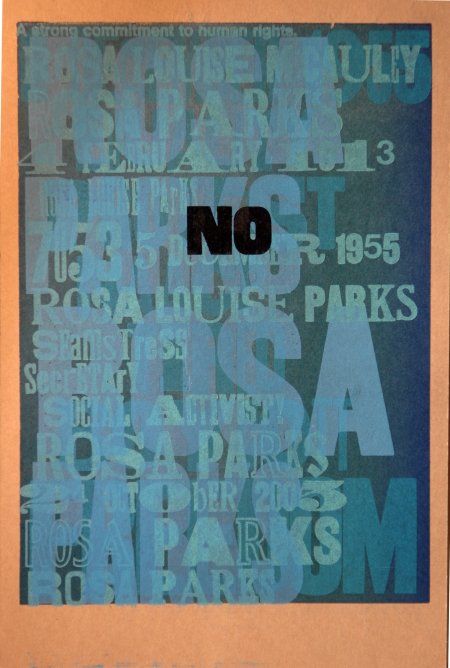 Within five minutes of seeing a printing press for the first time, Amos Kennedy decided to change the trajectory of his life.

At age 38, the AT&T systems analyst visited Colonial Williamsburg, Virginia, and came across an 18th-century print shop and book bindery demonstration. He knew then he had to quit his job of two decades and dedicate his life to printing and bookmaking. For over 30 years, Kennedy has been working as an artist and printer.

This week, the Detroit artist is at the University of Maryland as the Petrou Artist in Residence. He’s being hosted by BookLab, UMD’s dedicated space for the study of the codex book. On March 4 and 5, Kennedy and BookLab will host an open studio where students and faculty can drop in and create social justice-themed printing posters with this master printer. Kennedy will also give a lecture on tackling social justice through the medium of letterpress art.

“I believe printing, especially the kind of printing that I do, is a very democratic thing,” Kennedy said. “And I believe that people need to have that. We need to break down this wall of exclusivity.”

Kennedy earned his M.F.A. in graphic design from the University of Wisconsin-Madison in 1997 and lectures and teaches around the world. In 2012 he was the focus of 20KFilms’ documentary “Proceed and Be Bold” and in 2015, he was named a United States Artist Glasgow Fellow in Crafts, to illuminate the value of artists to American society.

Now considered one of the leading black letterpress printers in the country, Kennedy uses traditional handpress techniques to produce large editions of wildly colorful and provocative posters. He layers text so that no two prints are truly identical. The letterpress craft he has mastered involves a process of composing and locking movable type into the "bed" — or "chase" — of a press, inking it and pressing into paper.

His work often features quotes, proverbs, folk sayings and other forms of communal language in order to intervene in present day issues related to race and other issues in American society.

"I was told years ago that everything you do is political," Kennedy said in an interview with the American Craft Council. "And so my art is really a political statement. And the story of my art, when someone can actually cipher it out, is a statement of what I envision the world to be.”

“BookLab is thrilled to have him here getting loud and inky with students," Kirschenbaum said.

Learn more about Amos Kennedy’s workshop and lecture, March 4 and 5, at BookLab here.